A Week of Firsts

Last week we had 3 big firsts with the little guy. 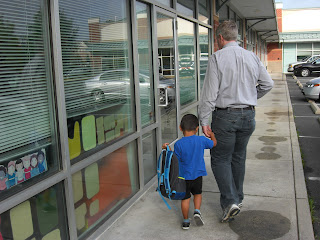 First, he started preschool – and loved it.  He’s only going 2 days a week, but that’s enough to give him some extra enrichment and preserve my sanity.  I bow to homeschoolers!  You guys Rock. It.  Out.

His first day included a reptile show.  I got there in time to see the massively huge and chill-inducing albino boa constrictor.  Let’s just say I’m not a big fan of the creepy crawlies in the world – but I don’t want to pass that along.  I even took him to an aquarium!  Any longtime friend of mine will tell you that is earth-shaking.  I should write about it some time.

Third, he got his first bee sting while we were at the playground on Friday.  Ann Voskamp-style, I thanked God for it.  We were very close to a pediatrician’s office and the fire department and there was no allergic reaction.  There are certain things you just can’t know until they happen.  We were at a very good place for that to happen.

He didn’t know what had happened, and it even took me a while to find the spot.  He whimpered for a second, brushed it off and was playing again in a matter of seconds.  This is the kid who didn’t flinch when having stitches removed from his forehead. 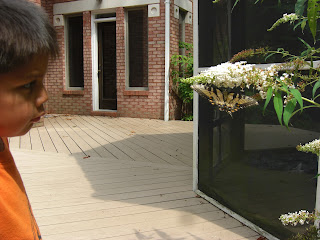 I know you’re thinking I can’t count.  Where’s the second thing?  Well, I wanted to save the biggest for last.  I think I have a budding muralist on my hands.

While engrossed in several Five Minute Friday contributions, the living room became an art studio.  I had no idea what was happening with 2 crayons on the other side of the office wall.  This was happening: 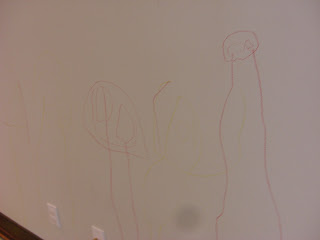 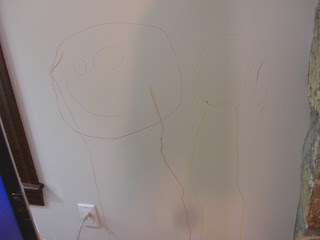 Apparently the larger is of himself with my sister’s family.  All five of them stand happily head and legs side-by-side.  This is roughly 6’ wide and 4’ high.  To the side of the television we have a lovely portrait of Daddy!  He’s probably thrilled that this shows no need for change in diet or exercise.  It’s just a smiling head and two legs.  Not sure why I didn’t make the cut.  But hey, that’s just one less thing to have to clean off the wall.  Have I mentioned that we rent this house?

Thankfully these are washable crayons and should come off just fine.  I'll follow it up with a magic eraser.  I’m adding that to the hydrogen peroxide and paper towels that should come with every little boy.  It was only a matter of time.  Luckily, all sharpies are safely out of reach, unless he is determined to keep on growing.

So just thought I would share a little of our life with you.  What’s going on in your world that’s caught you by surprise lately?
Posted by Unknown at 9:52 AM

Email ThisBlogThis!Share to TwitterShare to FacebookShare to Pinterest
Labels: about, boys, motherhood, random