Out Of The Box & Into Another

As I mentioned before, silence is not golden when you are the parent of a rascally 3 year old boy.  This is especially true when said child is curious and quite ingenious.  This was the case yesterday.

Quiet/nap time was anything but.  There were multiple relocations back to the bedroom.  Mind you there is a gate outside his door and door knob covers on two adjacent doors.  This is no deterrent for the little Einstein/Houdini that lives here.  Stealth is also becoming a trait.  I’m not sure where he’s doing his training.  Coronado, CA is clear on the other side of the country. (That’s where the Navy SEALs train)

When I went to check on what I thought was a sleeping boy I immediately sensed that things weren’t right.  Some doors were closed and others opened.  It took a bit to assess fully the situation at hand.  Some things weren’t discovered until hours later.  Does that give you an idea of the magnitude I’m talking about here?

The first thing that caught my eye was a brand new box of tissues that had been ripped open – WITHOUT A TISSUE IN SIGHT!  The first thought was that somewhere a toilet or two had been stuffed.  After the culprit had been interrogated, I was taken to the second scene.  They had been put into an empty baby wipes box.  All of them. 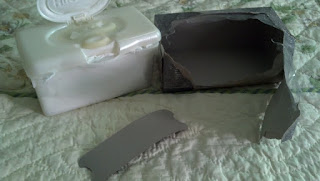 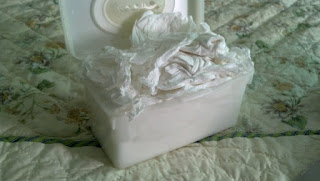 Look closely at this feat of engineering.  I couldn't close it after I inspected it.  We should have him start packing the suitcases and van for travel.  Have you ever seen so much in such a little space?  His father and I had to laugh and try to figure out how to keep the ingenuity without encouraging the destructiveness.  Talk about a parenting challenge.
How do you funnel all that energy and creativity in the right direction?  I think that is a never-ending quest.  For now we just have to make sure we are providing ample opportunity for discovery and experimentation while teaching some common sense.  Let’s hope that’s possible.

Jennifer is up to her eyeballs in school year-end stuff so today I'm linking up with Brooke at her new blog for the "One Beautiful Thing" challenge "to see your life as the beautiful work of art God made it to be."
-Amy